Hello Indiegogoers and supporter of Tellspec!

You may have also seen us at several live events such as CES in Vegas, the Food Innovation Summit in Brussels, and TEDxZwolle in Holland, where we have been demoing our working beta scanners.

We are moving forward, and wanted to let you know the latest on key fronts:

1. Hardware: We are currently working on finalizing agreements with key manufacturers so that we can get beta scanners produced and shipped out to our testers, developers, and contributors.

2. Hardware: We have started the process of minaturising our beta scanners for the final market version; we hope to be able show a new prototype unit by next month. You can see the current size and functionality of the beta prototype in some of our recent videos and interviews, such as during our interview with WebMD at CES .

3. Software: We are also almost ready with a data collection application for beta release. This application will help us collect scans from beta testers, and we aim to make it available at the same time as when we begin shipping beta TellSpec devices.

4. Software: We have recently integrated a large nutritional database, and are developing an application based on this database that will allow end users to track their intake and to generate reports.

5. App: We will be launching Tellspecopedia as its own app independent of the scanner, and hope to give you all free access to this app when it launches by mid/end of March as a token of gratitude for our support. 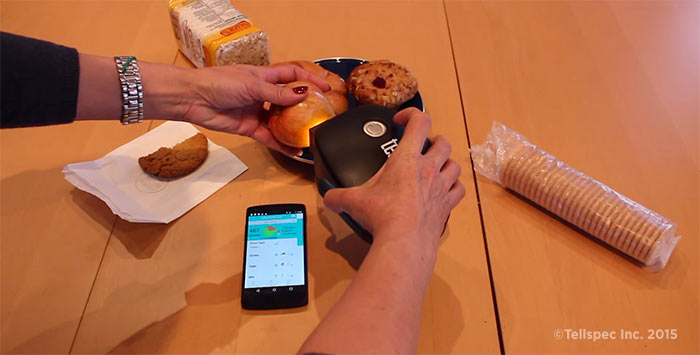 Here is quick video that demos of our beta scanners functionality.

Following in-person feedback from several of our contributors at CES, we are also now exploring the ways in which we can produce more content about the development and production process to give everyone a greater insight into our latest progress. So stay tuned!
Thank you for all your continued support.