Many of us know of at least one friend or family member that has a severe food allergy. To the average person, these foods are harmless, but to an allergic individual the presence of such allergens can mean the difference between life and death. The reason behind these dangerous reactions is rooted in the immune system’s response to allergenic proteins. An allergic individual’s immune system finds said proteins and reacts much like it would to a cold or flu, by causing inflammation and attacking the “invading” allergenic proteins. Though, unlike a reaction to a virus, the immune system attacks the allergen very quickly, often leading to swelling, rashes and anaphylaxis. 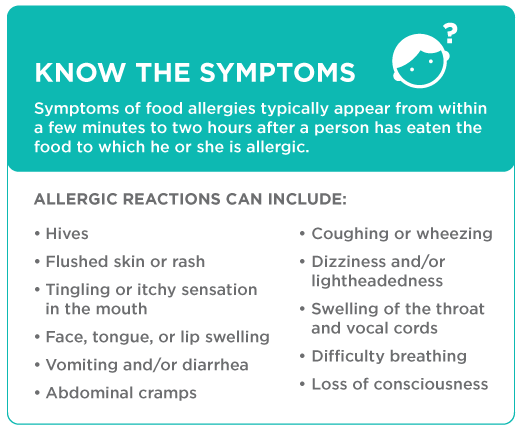 Severe food allergies affect roughly 1 in 21 Americans and 1 in every 13 American children. Though many children outgrow these allergies, the rate of food allergy diagnosis in children has been on the rise in the past few decades. In fact, a recent study by the CDC stated that food allergies in children have increased by 50% between 1997 and 2011, although the cause of this increase is still unknown. What scientists do know is that 8 allergens, including milk, eggs, peanuts, tree nuts, soy, wheat, fish and shellfish, cause 90% of all allergic reactions, while allergens such as mustard, sulfites and others comprise the remaining 10%. Today, we will be discussing the most prevalent food allergens: Cow’s milk, eggs, peanuts and tree nuts. Stay tuned for future blog posts about other common allergens, including soy, wheat, fish, shellfish, mustard and sulfites.

Cow’s milk is a common staple in the Western diet as it is found in butter, yogurt, cheese, cream, pastries, entrées and desserts>. Such products, as well as sheep, goat and buffalo milk, can cause significant side effects for those with Cow’s Milk Allergy. This is one of the most common food allergies in children, affecting 2.5% of North American children and 0.3% of adults. In addition, some children who are allergic to cow’s milk have been shown to be allergic to soy milk, as well.

Individuals with milk allergies often avoid milk-containing foods, but likely do so with the fear of getting osteoporosis when they get older. Therefore, those with milk allergies should note that a recent meta-analysis published in the American Journal of Clinical Nutrition in May 2009 found that “osteoporotic bone fracture rates are highest in countries that consume the most dairy”. In addition, they stated that “most studies of fracture risk provide little or no evidence that milk or other dairy products benefit bone”.

Allergies aside, milk-drinking individuals should also be aware that recently the International Dairy Foods Association petitioned the FDA to allow artificial or non-nutritive sweeteners to be unlabeled on milk products. Though the ingredients would still be shown in the ingredient list, the front label would no longer have to contain the words “reduced-calorie”. This would mean consumers could unknowingly choose artificially sweetened milk over natural milk—a choice many of us would still like the power to make. Given that this petition has not yet been accepted, the current labeling standards still apply.

Eggs are produced by birds, reptiles, amphibians, and fish, though humans consume chicken eggs most often. Chicken eggs are used in many different foods including mayonnaise, sauces, breads, batters and pastries. Egg allergies (which affect 1.3% of North American children and 0.2% of adults) are often caused by proteins found in the egg white, such as ovalbumin, but can also be caused by proteins in the egg yolk, such as apovitillin. Versions of these proteins can be found in the eggs of many bird (chicken, duck, quail, turkey and ostrich, for example)and fish species, though the cross-reaction of fish roe with bird’s egg allergens is rare.

Aside from egg-containing foods, individuals allergic to chicken eggs should also be cautious of flu vaccines as chicken eggs are used in the production of flu vaccine. Otherwise, for egg consumers, reconsidering the source of our egg products may be of interest. A recent report published in the Journal of Holistic Nursing Practice in 2010 found that factory farmed egg consumption is linked to increased salmonella poisoning compared to cage-free eggs.

Peanuts are members of the legume (bean) family of plants and are commonly found in baked goods, cooking oils, sauces and Eastern cuisines. Approximately 2.1% of American children and 0.6% American adults suffer from peanut allergies and similar rates of peanut allergy are seen in other westernized countries (Canada, United Kingdom, Australia). Unfortunately, peanut allergies cause the most cases of anaphylaxis out of all of the allergens, and since the prevalence of peanut allergies in children has increased nearly four-fold (0.6% to 2.1%; U.S.) in the past decade, the increased risk of death in children has become a pressing concern.

In response to the increase in peanut allergies, many scientists have begun to engineer peanut plants that are hypoallergenic by selectively removing the genes responsible for producing peanut allergens. These new strains of peanuts would theoretically be safe to eat, and would produce no allergic reactions. Though that may be the primary concern for those with peanut allergies, peanut crops may also be harmful to non-allergic individuals as they are often rotated in fields that grow cotton. These cotton fields are often sprayed with herbicides (linked to various health conditions) that can still be present in the soil when the crops are rotated.

Tree nuts are dry fruits that contain one seed and a hard outer wall, such as almonds, cashews and pecans. These nuts are primarily used in baked goods, desserts, cereals, and Eastern cuisines. The majority of tree nut allergies (affecting 0.2% of North American children and 0.5% of adults) are caused by certain proteins that are common across many types of tree nuts. Due to this, many of those with tree nut allergies are allergic to more than one type of tree nut.

Tree nut and peanut allergies often go hand-in-hand, with many sufferers bearing both types of allergies. Therefore, those suffering with any type of tree nut allergy should be cautious when purchasing packaged foods as cross-contamination can occur in food processing plants that handle tree nuts, peanuts or both.

TellSpec Top 5: The metals in your food