Trans fat. By this time, surely a pair of words that brings up thoughts of ill health, negative effects, and disease. Research within the past decades has brought to light the risks associated with intake of trans fats, to the point where labelling has become mandatory and many institutions have called for outright bans of trans fat. Today TellSpec will be discussing what trans fats are, exactly; what health effects are associated with intake; where they are found; and a brief discussion of artificial vs natural trans fats.

What is a trans fat? The word trans refers to the actual configuration of the fatty acid. Molecules of fat contain fatty acids, chains of carbon, hydrogen, and oxygen atoms; the arrangement and number of these atoms is what makes for different fatty acids. A trans fat contains one or more double bonds in trans geometric configuration—a technical description, but essentially it means that the fatty acid is straight. A straight fatty acid will align more closely with another straight fatty acid, meaning that that fat will be more solid at room temperature. So we can see why shelf-stable foods tend to contain more trans fats—manufacturers want fats that will stay solid at room temperature and have a longer shelf-life. 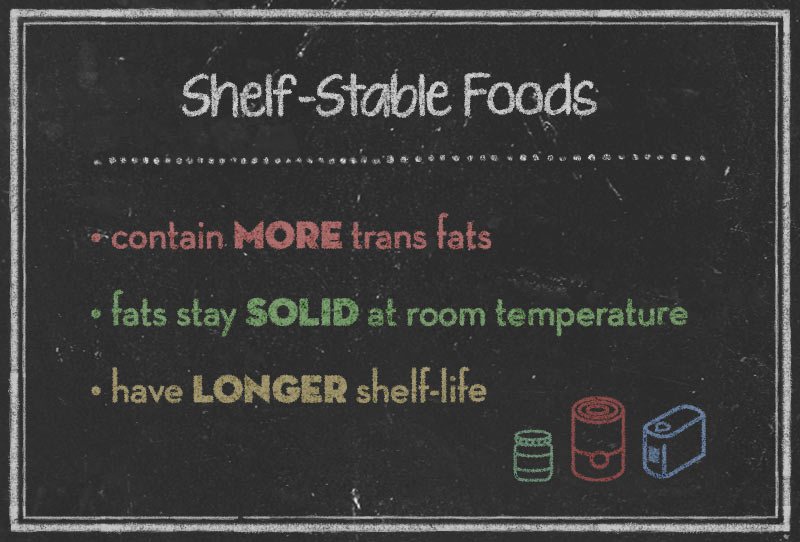 Trans fats have been investigated heavily in the past few years. Particularly after the fiasco of hydrogenated vegetable oil margarines which contained trans fats being promoted as far healthier than butter with its high saturated fat. This came under fire with the discovery that the trans fats in those early brands of margarine were quite dangerous (as well as recent research that has taken saturated fat down from the position of indisputable villainy.) Most manufacturers have reformulated their spreads to contain minimal or no trans fats, however the nutrition and ingredients labels are the best guide. As far as whether margarine or butter is “superior”, the debate over each one’s pros and cons continues.
Consumption of trans fats is shown to increase risk of coronary heart disease: the ratio of good and bad cholesterols in the bloodstream is negatively skewed, the amount of triglycerides (fats) in the bloodstream is increased, and system-wide inflammation is encouraged. Trans fat intake impacts the body’s ability to utilize essential fatty acids such as Omega 3s. It has been shown to promote obesity and abdominal fat deposition in animals, even when fed the same number of calories as the control. Trans fat intake has also been associated with the development of Type 2 Diabetes, including studies showing abnormally increased insulin levels after eating a trans fat-containing meal. Furthermore, as trans fats are so commonly found in highly processed foods, the health risks associated with such a diet, which is likely high in overall fat, sugar, and sodium, are only compounded by the trans fat. 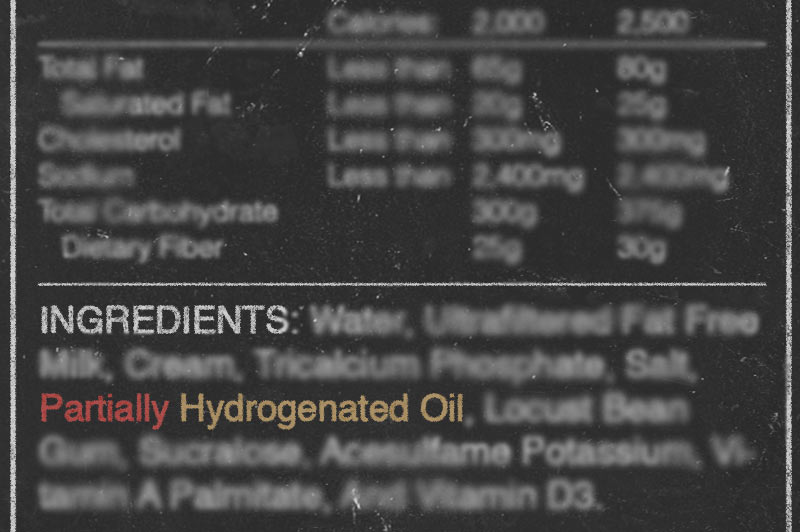 So where does the consumer look to locate trans fats? Among others: processed snack cakes, frostings, peanut butters, chocolates, candies, fried foods, chips, even bread. Ultimately however, it’s the ingredients label that is your best guide: key words include partially hydrogenated oil and hydrogenated oil. Pay particular notice to partially hydrogenated. Scanning the ingredients list is essential as certain labelling laws regarding trans fat vary. For example, in Canada trans fat labelling is mandatory even below 0.2g per serving. In Australia, the UK, France, and Germany labelling is entirely optional, whereas other countries such as Denmark, Austria, and Switzerland mandate that trans fats may not exceed 2% of the total fat content. In the US, labelling is mandatory, however foods containing less than 0.5g of trans fat per serving can be labelled as trans fat-free. As serving sizes are distorted and even trace trans fats are hazardous, consumers must take initiative.

Finally, trans fats can be found naturally occurring in animal products from ruminants such as cows, specifically meat and dairy. For example, 1 cup of 2% milk contains 0.2g of naturally occurring trans fat. These natural trans fats, rather than those artificially produced through hydrogenation, include vaccenic acid and conjugated linoleic acid (CLA). CLA is sold as a health supplement and has been promoted as able to aid in reduction of body fat. Vaccenic acid is itself a precursor to CLA and some studies have suggested it to have beneficial health effects. Overall, however, the research, particularly in humans, is limited and governing bodies maintain that all trans fat intake should be kept at a minimum.

Facing the effects of fungicides in our food
Scroll to top